Busy with the BeagleBoard

Yesterday I decided that the time had come to get to grips with embedded Linux. I ordered a BeagleBoard Xm from Farnell, a suitable wall-wart from Maplin, and started counting the hours until they arrived.

Both turned up this morning and my brand new BeagleBoard is up and running. My biggest worry was the possibility of blowing the board by connecting the power supply the wrong way round; maybe the manual tells you about the required polarity of the power plug, but I couldn't find the information anywhere. As usual, Google was my friend; it turns out that the board requires a centre-positive, earthed shield plug. The Maplin PSU is configurable, but the required polarity is the opposite of what the Maplin markings suggest is the norm. I strongly advise you to check the polarity of the plug with a multi-meter before you plug it into your precious BeagleBoard.

I'm still waiting for a couple of microSD cards; Argos has them at at three times the price I paid on Amazon, and for now I'm happy playing with the test distribution which comes with the kit.

The test distribution is a usable version of Angstrom. I followed the great getting started guide on IBM developerworks. It's helpful, but a little out-of-date; it suggests that the test distro is ram-disk based and loses changes to the filesystem on re-boot, but that's not the case. I took the screenshot shown below during my first session and it was still sitting on my desktop when I rebooted. 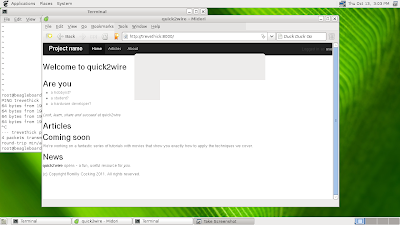 As you can see from the screenshot, the distro comes with a lightweight but functional web browser and many of the tools you'd expect to find in a desktop environment. It doesn't come with the nano editor; perhaps I'll finally get to grips with vi. (Doh. It's got gedit. I can stay a mouseman). It does include Python, which makes me very happy.

I started writing this post while the distro was updating. It's now finished.

This inexpensive board has much, much more computing power than the Atlas - a supercomputer I programmed in the late 60s. When the first Atlas was commissioned, people said that the UK's computer power doubled overnight.

I'm looking forward to a couple of months' happy play research with the BeagleBoard - and by then, with any luck, I'll be able to play with a Raspberry Pi.
Posted by Romilly Cocking at 4:43 pm